Bete Noire's body and magic
Chara however it is "tamed"

HATE is a dark substance that is the true main antagonist for both Season 1 and Season 2.

Not much is known about it, but it has been proven to be even more dangerous and far more powerful than FEAR and DETERMINATION.

HATE is neither a soul nor a soul trait, and it works as an enhancer.[1]

When HATE begins to take control of their host, they begin to act more violent, psychotic, and brutal and progressively begin to lack self-control. They may even become horrifically sadistic and have no remorse or regret for their actions; they'd also start to seem to enjoy mutilating and torturing others perversely. An example of its cruelty was when HATE Chara ruthlessly tore off Omega Flowey's arm in Your Best Friend while showing no remorse or guilt at Flowey at all. Another example could be when Asriel, being corrupted with HATE, stabbed his own father Asgore, almost killing him, without any source of remorse.

Unlike all of the Glitchtale villains, HATE is a purely evil substance with no redeeming qualities whatsoever, making HATE completely non-archetypal compared to many other villains of Glitchtale. 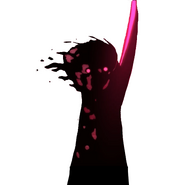 Add a photo to this gallery

The appearance of the substance itself is similar to Akumu's. It seems to be a fully black blob being able to change their irises and mouth from white to red, changing its shape.

In Animosity, HATE appears with a pink glow after taking Bete's magic. Also appearing to take a humanoid shape.

Chara as HATE starts to take over their body 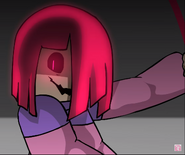 Sans infected by HATE
Add a photo to this gallery
As for HATE vessels, the color of their irises depends on their soul trait (But if it is a monster, it is black) while their sclera turns black. The more the HATE corrupts its host, the more the black substance will take over their host's entire body, excluding their hair. But even when Frisk had HATE with them on Megalomaniac, the HATE failed to take over Frisk's body, including Chara's (excluding their black scleras).

The first vessel for the hate was Frisk, as they were consumed by it. During Frisk's genocide route, it overcame them, but eventually left and took over Chara during Frisk's reset in Megalomaniac, only worsening by every moment that passed.

Ever since the first episode, HATE has been with Chara and transformed them to become evil while giving them more power. Chara's feelings and emotions were erased thanks to this substance, which meant that Chara could even kill the person who Chara loves the most with a sadistic-like behavior.

In Continue, HATE directed Chara to kill Asriel after objecting to their demands. Whenever Asriel tried to tell Chara an old moment or try talking to them, HATE would destroy Chara's feelings more and encourage them to kill him more bluntly. With love, Asriel managed to get HATE out of Chara, but Chara died because they no longer had the DETERMINATION to live. Then Asriel used their soul as a vessel of the seven soul traits that spawned in Continue.

When the barrier broke, HATE escaped from Mount Ebott but was seized by the AMD. They placed it in a vial, as Jessica Grey began a hidden research project on what HATE was, and Bete ends up helping her figure that out in a conversation. However, Jessica lost the vial to Bete in Dust due to Bete forcefully stealing it from Jessica by using torture.

When Bete was "killed" by Undyne in Love, Kumu ate the HATE vial to save Bete. HATE immediately found a new host (who is Bete) and used the "Regeneration" ability to bring back the disintegrated parts of Bete. Despite this power, Bete ends up fleeing as they felt the side effects of the substance and were losing their self-control.

Frisk’s soul is seen as having a drip of HATE. Within the next part, Bete begins getting the blunt of Frisk, and in a last-ditch effort, she uses HATE on Sans' own soul, reviving him under the control of them. However, with Papyrus entering the scene, they used their love to remove the HATE from Sans, and so Bete fled once again.

In My Promise, Bete uses some HATE on Asriel's soul, reviving him in the process. Later, Bete makes Asriel battle Toriel and Asgore. Toriel and Asgore desperately try to save Asriel from HATE by showing their compassion to him, but unfortunately for them, it failed. Frisk, Toriel, and Asgore were forced to retreat since they eventually figured out they couldn't win against both Asriel and Bete.

In Animosity, Chara manages to take the HATE away from Asriel and lets it into his soul. Meanwhile, Bete is killed by Gaster, causing the HATE to take her magic and separate itself from Bete. HATE manages to cast a hallucination on Papyrus and tries to attack him, only for Chara to intervene. Chara then tells the substance that he will show them his Animosity (controlled Hate).

In a deleted scene, HATE talks with Bete and how they finally found a physical form to reside with, though the live-stream associated with it has been removed.

Disclaimer: This scene is not part of the Glitchtale storyboard, because it was removed by Camila.

Add a photo to this gallery

Retrieved from "https://glitchtale.fandom.com/wiki/HATE?oldid=116481"
Community content is available under CC-BY-SA unless otherwise noted.